Nemesis is a genetically-engineered super-soldier developed by the Umbrella Corporation in Paul W. S. Anderson’s Resident Evil film series. This mutant monster is based on the creature of the same name from the video games, though there are significant differences between them. The Nemesis appeared in the series’ second installment, Resident Evil: Apocalypse 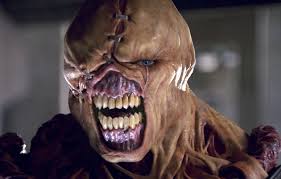 By visiting and using this website, you agree to the use of cookies and other technologies to process your personal data to enhance and personalise your experience.